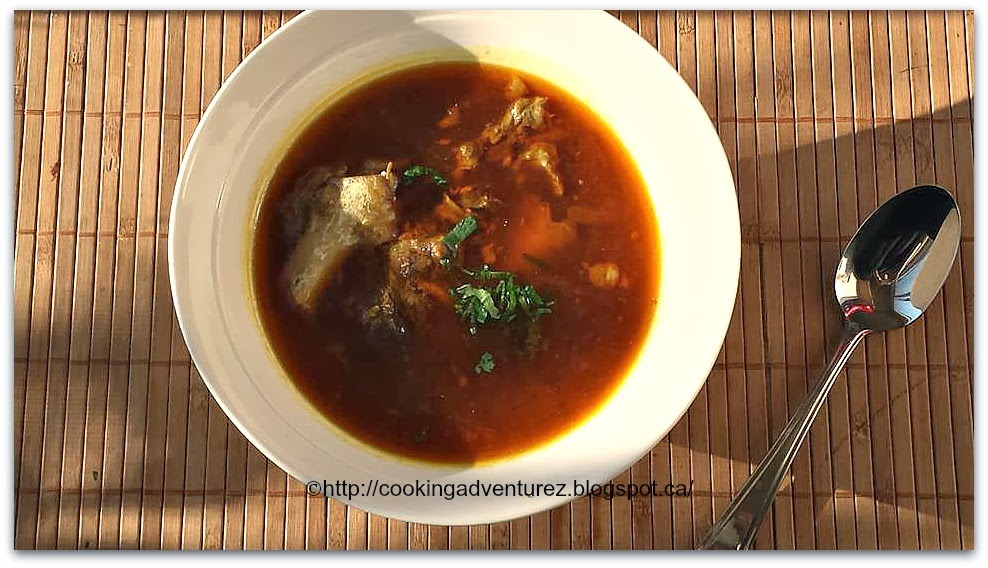 Lamb trotters are a very common way to make soup specially in winter. Traditionally it is served with naan or even steamed rice. My mother always said, it keeps the cold and flu away. Its a little fatty since there is a lot of bones and bones have marrow but its delicious and heart warming on cold windy days.

Heat the oil in a pan and add sliced onions. Fry the onions till golden brown. Take the onions out and spread them on a paper towel and let them get crisp.
In the same oil, add the trotters. Fry them for a couple of minutes and put the garlic paste.
Add the tomatoes, ginger paste and all the spices leaving garam masala and cilantro leaves.
Keep frying the trotters till every thing has browned nicely and oil separates from it leaving the spices and ginger garlic paste sticking to the trotters.
Pour enough water to cover the meat around 8-10 cups. Let it come to a boil and then lower the heat to a simmer.
Let it cook for 2.5-3.5 hours.
Turn the heat off when the meat is falling off the bone. (You may need to add more water to adjust the consistency of the soup and taste for the salt and adjust it according to your taste)
Put the crisp onions in and stir. Sprinkle garama masala powder and cilantro leaves.
Serve hot with naan or boiled rice.

Note:
Some people prefer making it without tomatoes but i like because tartness of tomatoes cut through the fatty soup really well and complements the flavour. You can skip it if you like.
Posted by Unknown at 08:33